By GCFNovember 18, 2022GCF in Action
No Comments

This week, four West African giraffe were captured by giraffe experts in the security stricken ‘Giraffe Zone’ and embarked on a courageous journey to their new home in the Gadabedji Biosphere Reserve in Niger. In a daring 48-hour mission they travelled over 800 kilometres to join the first group of West African giraffe that were re-introduced to the reserve in 2018 after an absence of almost 50 years.

This conservation success story is a great example of an effective conservation collaboration between the Government of Niger, local Nigerien people who share their space with wildlife, and international NGOs. 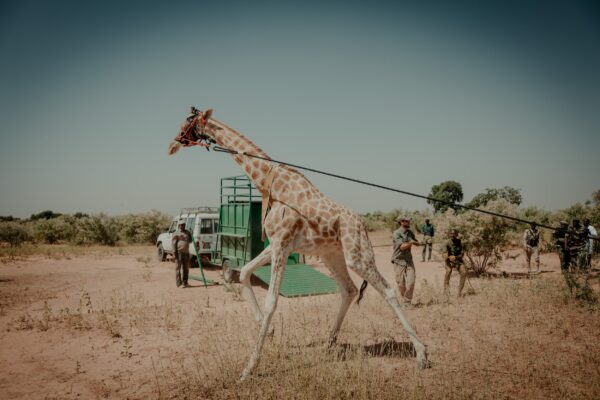 The Giraffe Conservation Foundation (GCF) in collaboration with the Nigerien Ministry of Environment and in support of the implementation of the National Giraffe Conservation Strategy of Niger, with in-country support from SaharaConservation and Wild Africa Conservation, announces the safe arrival of four highly threatened West African giraffe (Giraffa camelopardalis peralta) at the UNESCO Gadabedji Biosphere Reserve. This is ‘mission accomplished’ after several days of capture and boma (enclosure) training in the ‘Giraffe Zone’, an area approximately 60 kilometres east of the capital Niamey, a group of four giraffe was translocated over 800 kilometres by truck to their new home in Gadabedji Biosphere Reserve. This inspirational undertaking that took place under high security and military protection builds on the ongoing conservation success of the last West African giraffe.

The world’s last remaining population of West African giraffe, a subspecies of the Northern giraffe (Giraffa camelopardalis), are an isolated population, restricted to the ‘Giraffe Zone’ in the Republic of Niger. While the ‘Giraffe Zone’ is not formally protected, it forms part of the W Transboundary Biosphere Reserve and covers more than 1,700km2. The next closest population of giraffe can only be found more than 2,000 kilometres away in northern Cameroon and southern Chad. However, these giraffe are very different as they belong to another subspecies of the Northern giraffe, the Kordofan giraffe (G. c. antiquorum). Operation Sahel Giraffe II took place in mid-November 2022 and followed the first-ever re-introduction of West African giraffe to Gadabedji Biosphere Reserve in 2018, which was also spearheaded by GCF and partners in support of the Government and the people of Niger. After a year of preparation, four female giraffe were individually captured in the ‘Giraffe Zone’ and transferred to a holding pen (boma), where they were kept for several days to prepare them for the long and arduous journey. Giraffe and team travelled more than 800 kilometres over 48 hours in a convoy under heavy military protection to bring their precious cargo to their new home. The four giraffe were successfully released on Wednesday in Gadabedji Biosphere Reserve, where they promptly joined the resident giraffe population that was established in 2018. How well these giraffe had adapted to their new home became obvious recently when local rangers reported a small ‘baby boom’ with the birth of the first three calves in Gadabedji in as many months.

“The recovery of West African giraffe both in the ‘Giraffe Zone’ and in their new home, the Gadabedji Biosphere Reserve, since the first re-introduction in 2018 is an incredible achievement and this is due to the fantastic collaboration of the Government of Niger, local communities, and international NGO partners. Niger was the first-ever country in Africa to develop a national conservation strategy in 2013 and this is a wonderful success coming from this joint effort to save the last population of West African Giraffe.” says Colonel Major Yacouba Seybou, General Director of Water & Forest Department at the Ministry of Environment and Fight Against Desertification in Niger.

Approximately 50 years ago, giraffe became locally extinct in the Gadabedji area due to a disastrous combination of drought and illegal hunting. Since 2013 Niger’s Wildlife Authority, with support from the Niger Fauna Corridor Project/GEF/UNDP, has worked diligently towards restoring the region’s wildlife and their habitat. The re-introduction of giraffe has helped to enrich the reserve’s biodiversity and contributed to increasing community development and support in the region. “I have first-hand experienced the value of strong conservation partnerships in support of our giraffe here in Niger. Since the first re-introduction, the community support has been astounding – people are so proud to have ‘their’ giraffe back in this beautiful landscape. They have protected the giraffe – like their livestock, and we can be assured that these new giraffe will immediately become as much part of the local community as their brothers and sisters in 2018. This translocation is part of GCF’s wider giraffe translocation programme throughout Africa. So far, GCF has helped to re-establish or augment giraffe populations in their historical habitat and effectively established more than ten new giraffe populations and increased giraffe habitat in Africa by over 7 million acres of land. Here in Niger, we are another big step closer to having a second viable population of West African giraffe.” says Abdoul Razack Moussa Zabeirou, Niger Coordinator Giraffe Conservation Foundation/ SaharaConservation.

In the mid-1990s, the were only 49 West African giraffe remaining in the wild, and as a result the subspecies was listed as Endangered on the IUCN Red List of Threatened Species in 2008. Comprehensive conservation efforts by the Government of Niger, in collaboration with local and international partners, triggered an amazing recovery and the population counts >600 individuals today. This positive trend did not go unnoticed and resulted in the downlisting of this giraffe subspecies to Vulnerable on the IUCN Red List in November 2018. “This translocation was an important milestone for the West African giraffe, and we are proud and relieved that we have succeeded in this mission that was delayed several times from the worldwide Covid-19 pandemic and ongoing security threats in Niger and throughout West Africa. From a conservation health perspective, it was imperative to bolster the giraffe population in Gadabedji Biosphere Reserve and continue to support the healthy and already growing herd that was established in 2018. While giraffe continue to thrive in the ‘Giraffe Zone’, their safety is not guaranteed. Our team took a huge risk in moving these giraffe – specifically from Koure to Gadabedji. We captures these giraffe close to the very spot where both Nigeriens and foreign French tourists were killed in a senseless act of terrorism a few years ago when innocently visiting these rare giraffe. It was not an easy mission and keeping both giraffe and the team safe was not an easy task by a longshot, however, the reward of seeing these four majestic animals run free into their new home made it all worthwhile.” says Dr Sara Ferguson, Conservation Health Coordinator of the Giraffe Conservation Foundation.

Giraffe numbers have plummeted throughout Africa over the past century – a situation that has often been called a ‘silent extinction’ by the Giraffe Conservation Foundation to change just that and draw attention to this dire situation. Pressures including habitat loss and fragmentation, civil unrest, and illegal hunting reduced giraffe numbers, however, the last few years have seen a rebound of giraffe in large parts of their range due to dedicated giraffe conservation actions. Latest numbers that were released by the Giraffe Conservation Foundation earlier this year show that the overall giraffe population has expanded from <100,000 to ~117,000 animals in all of Africa. Once widespread throughout West Africa (including Senegal, Mauritania, Mali, and Nigeria), West African giraffe now only occur in Niger. In the ‘Giraffe Zone’ West African giraffe share their habitat with local communities and their livestock, and naturally compete for space and resources. Their threats include agricultural encroachment, climate change and variability, human population growth, and natural resource over-exploitation. As a result of a growing giraffe population and increasing human population pressure, giraffe have started to migrate out of the ‘Giraffe Zone’, where they find themselves in conflict situations with human populations who are unaccustomed to their presence, and too close to the insecure border areas with Burkina Faso, Mali, and Nigeria. “The impact of giraffe translocations to Gadabedji Biosphere Reserve goes beyond the return of a highly threatened species into its historical range. It is also a unique opportunity to use this momentum and restore other iconic species e.g. North African ostrich, Scimitar-horned oryx and Dama gazelle which occurred there when the Reserve was created in 1955. As part of its broader vision, bringing more giraffe is a real game changer for the reserve management. Wild Africa Conservation and its partners in close collaboration with the Ministry of Environment with the financial support of the European Union are working to establish an innovative and inclusive delegated management model addressing the real challenges to conciliate conservation, pastoralism and the advancing agricultural front based on the landscape approach.” – says Dr Thomas Rabeil, Wild Africa Conservation.

The joint team of the Giraffe Conservation Foundation, SaharaConservation and Wild Africa Conservation has worked collaboratively alongside Niger’s Ministry of Environment and local communities for almost two decades to secure a future for West African giraffe in Niger. Niger was the first country in Africa to develop a National Giraffe Conservation Strategy in 2006 and by this has elevated the protection of these iconic animals. Today, the second Niger National Giraffe Conservation Strategy guides giraffe conservation efforts in the country and re-introducing West African giraffe into safe areas within their historical range is a key component of this strategy, which will in turn benefit both local communities and wildlife equally. The expanding founding population in Gadabedji Biosphere Reserve is a critical first step towards the development of a flagship wildlife reserve in Niger.