Where do giraffe really live?

All four species of giraffe were studied using both ground and aerial surveys. The results of the work show a 5.6% decline in the range area of all giraffe as compared to the 2016 IUCN Red List assessment map of giraffe ranges.

“Today, two types of giraffe are listed as Critically Endangered, while another two types are listed as Endangered. Across Africa giraffe are in decline, and some are in serious risk of extinction. Unfortunately, the fate of these giants has largely gone unnoticed. But that is changing, we and our partners have been working hard to secure funding and partner with African governments to ensure giraffe survive and remain an icon of Africa.” said lead author David O’Connor, Population Sustainability researcher for San Diego Zoo Global. 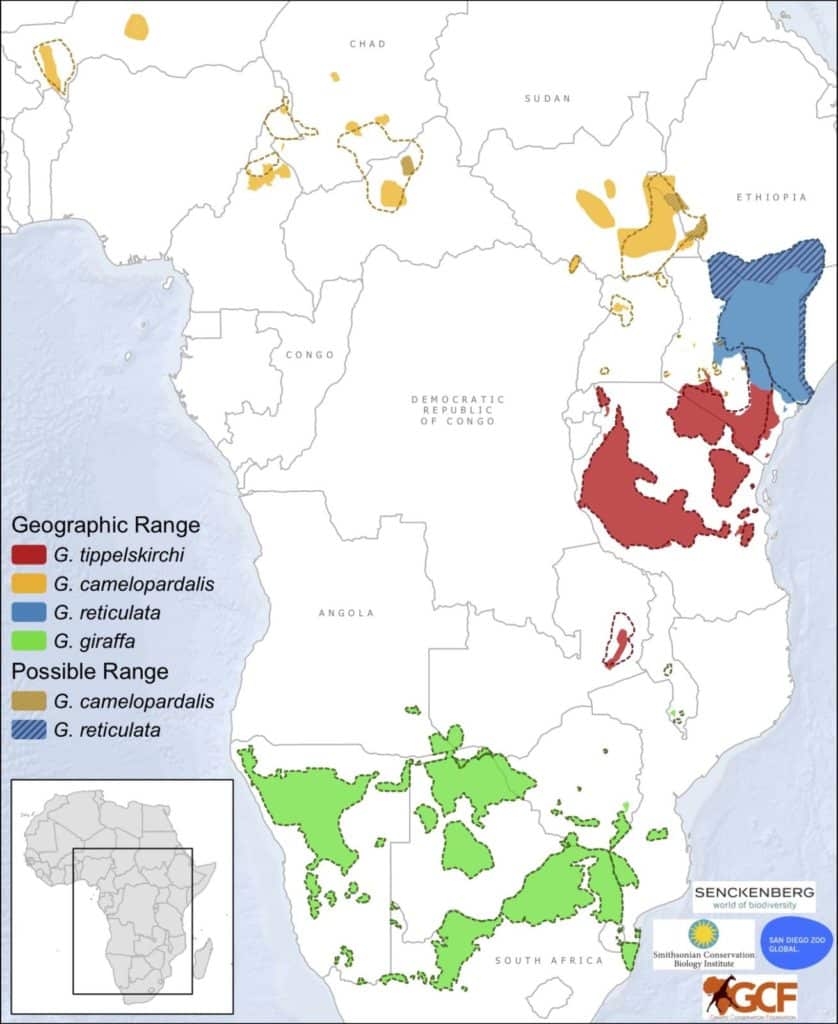 The first step in saving these species is knowing where they are, this new research provides the most accurate range maps for giraffe ever produced.

According to the IUCN Red List of Threatened Species giraffe populations have declined by over 40% in the last three decades with significant changes seen in available habitat due to increased human activity and habitat changes. Although ranges were larger in some African countries than previously reported, in seven (Cameroon, Central African Republic, Chad, Malawi, Niger, Uganda, and Zambia) giraffe ranges had declined significantly.

“Populations under distress can show complicated patterns of change with some species showing greater sensitivity to habitat shifts”, said O’Connor. “In Kenya, the ranges of both Northern giraffe and Masai giraffe have decreased but the range of reticulated giraffe was larger than previously thought.”

“However, these changes are likely more a reflection of the increased accuracy of the data available, than a reflection of decrease or increase of ranges over the past two years” added Dr Thomas Mueller, Senior author and head of the research group ‘Movement ecology’ at the Senckenberg Biodiversity Climate Research Centre.

This new research will be an important baseline from which real range changes can be measured in the future. Due to minimal attention previously such detailed range maps for giraffe have not existed.

The main source of data for the update came from a series of aerial surveys of 18 African nations during the Great Elephant Census, a Paul G. Allen project, that occurred in 2014-2015. Ground observation data were also collected during additional wildlife surveys from GCF, the Northern Rangelands Trust Wildlife-Conservancy Management Monitoring System, direct observation by the Twiga Walinzi research team based in Kenya, satellite imagery and information from many other research groups added to the knowledge base. Through this effort hundreds of people all over Africa were united in their effort to learn more about wildlife.

“The only way to secure a future for giraffe in the wild before it is too late is through collaborations and partnerships. This work highlights the power of international experts coming together for a common cause: lucky there are a few folk out there who care about giraffe” said Dr. Julian Fennessy, Co-founder and Co-director of GCF.

“By better understanding where giraffe currently live, we can assess why they went locally extinct in some areas and importantly apply conservation measures to minimize their risk of further extinctions in the future. We need to act now and turn around the ‘silent extinction’ that giraffe faced across some parts of Africa” said Fennessy.